Homes throughout Southern California, in locations such as Indio, Bonita, Bonsall, and many others, have been aware that 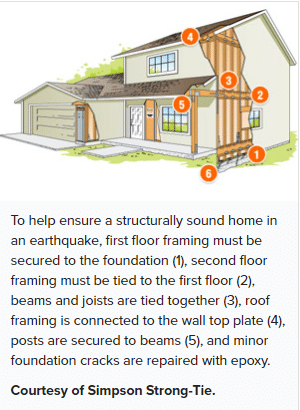 earthquake retrofitting is necessary to improve the chance that their home will survive an earthquake. The issue concerning earthquakes and homes in California isn't a matter of 'if, but 'when' a tremble will affect the integrity of a home's structure. Before a homeowner should even consider companies for installing a seismic retrofit, they should understand how exactly an earthquake affects their home.

Earthquakes impact a home with a combination of lateral and uplift forces. Lateral (shear) forces are horizontal forces that result in a back and forth movement, also known as 'racking'. These forces can literally shake a home off of its foundation or weaken the frame tremendously.

Uplift forces are vertical forces that create up and down movements that can cause a house to overturn and/or lift off of it's raised foundation. Homes on a raised foundation, built on a system of posts, beams, and 'cripple walls', are especially vulnerable to the effects of earthquake activity.

Current building codes now require homes to meet higher structural design standards, which include a 'continuous load path'. A CLP is a series of solid connections throughout the home consisting of wood framing, metal connectors (bolts or nails), and shearwalls. Homes over 25 years old are recommended to have earthquake retrofitting because their construction did not require these safety measures.

Along with a home 25 years or older, homeowners in possession of a home on a raised foundation should have their home evaluated for a seismic retrofit. The supporting structure of their home hasn't been bolted securely to the foundation, thus being highly susceptible to the effects of an earthquake.

If you have questions regarding the potential for your home to survive an earthquake, call Saber at 1-800-922-2488 or visit our website www.saberfoundations.com. Scheduling an appointment for a free inspection and estimate can mean the difference between your home still standing and starting all over from scratch.

Back to Previous Page
Back to Saber Foundation Repair | Blog